A currency crisis is when, serious doubt exists as to whether a country’s central bank has sufficient foreign exchange reserves to maintain the country’s fixed exchange rate. The crisis is often accompanied by a speculative attack in the foreign exchange market. A currency crisis results from chronic balance of payments deficits, and thus is also called a balance of payments crisis. Often such a crisis culminates in a devaluation of the currency.

With the globalization of financial markets international capital mobility has increased enormously. Financial deregulation, the elimination of capital controls, the liberalization of local markets and the ample creation of derivatives has intensified competition in the financial industry and reduces transaction costs. Together with the extension of trading foreign shares at different stock exchanges, this has constituted a world market, making possible financial transactions 24 hours a day around the globe. Emerging economies experienced high economic growth over a long period of time, encouraged by low salaries, skilled labor and attractive investment opportunities especially during the recession in industrial countries in 1990s. In order to attract capital; emerging economies liberalized their financial sectors to facilities access by foreign investors. Since equity and obligation markets in such countries are not sufficiently developed, capital inflows usually take the form of bank credits. The lack of efficient institutions and supervision of the banking system as well as the absence of binding rules for risk management and bookkeeping standards enhanced the danger of financial distress.

Strong capital  inflows led to a substantial accumulation of central banks foreign currency reserves and to an  increase in money supply and domestic credit although emerging countries pursued stabilizing monetary and fiscal policies in order not to run into inflation. Domestic firms and banks increasingly demanded credits in foreign currency, due to the fact that foreign interest rates were lower than domestic ones. Ignoring exchange rate risks the interest differential seemed to be too high. The accumulation of short term foreign debt could therefore trigger a currency trigger.

Contagion is another important reason for a currency crisis. Difficulties or crisis in certain in certain countries may place doubt on the economic stability of other countries and areas. The more a country is linked with one that is suffering from a currency crisis, either through a similar export structure, or intensive mutual trade, the same culture and language, exposure to the same type of external shocks, a similar  financial market structure etc. the more susceptible it to such a crisis. There can be an awakening effect: countries which seem to be similar to a country that actually experiences a currency crisis are suspected of being prone to run into the same difficulties. Such generalizations without a thorough inspection of a country’s specific situation may trigger a crisis in a country which in fact has sound fundamentals.

Abundant liquidity is an incentive for banks to give easy credits. Implicit government guarantees give rise to moral hazard and adverse selection. While granting credits, banks would earn profits in the case of positive events whereas for negative ones they could burden heavy losses on society. In East Asian countries e.g. domestic banks and firms increased their risk exposure to a large extent, which led to a growing number of inefficient investments. Widespread corruption reinforced this tendency. Another source of moral hazard was the expected financial help the IMF would offer to countries experiencing a currency crisis. 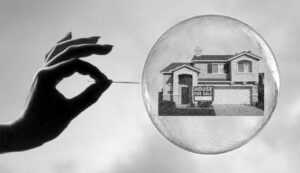 In many East Asian countries domestic credit expansion generated a boom in the real estate sector and equity markets, which gave rise to speculative bubbles. The inflation of real estate prices was nourished by increased demand but prices began to fall when the saturation of the market and pessimistic expectations increased the number of non-performing loans. As bad loans were not paid back and many depositors withdrew their money, banks had to be closed. Bank runs finally put doubt on the government’s ability to defend the peg. Faced with this situation, the government pursued a restrictive monetary policy which caused interest rates to climb in an unprecedented way. Even with rocketing interest rates it was not possible to stop the outflow of capital because devaluation risks were considered to be too high. The rise in interest rates forced many firms into insolvency.

For more on International Business Management click on the link below: