In economics, x-efficiency is the effectiveness with which a given set of inputs are used to produce outputs. If a firm is producing the maximum output it can, given the resources it employs, such as men and machinery, and the best technology available, it is said to be technical-efficient. x-inefficiency occurs when technical-efficiency is not achieved.

This theory, originally developed for another purpose, has recently been applied to analyse the role of the entrepreneur. Basically, X-efficiency is the degree of inefficiency in the use of resources within the firm: it measures the extent to which the firm fails to realize its productive potential. According to Leibenstein, When an input is not used effectively the difference between the actual output and the maximum output attributable to that input is a measure of the degree of X-efficiency. 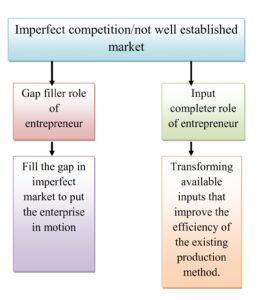 The theory concludes that an entrepreneur has to act as gap filler and an input completer if there are imperfections in markets. For using there unusual skills, he gets profits as well as a variety of non-peculiar advantages. According to him there are two types of entrepreneurship.

The innovative theory is one of the most famous theories of entrepreneurship used all around the world. The theory was advanced by one famous scholar, Schumpeter, in 1991. Schumpeter analyzed the theory proposed by Marshall, and he concluded that the theory was wrong.

Schumpeter believes that creativity or innovation is the key factor in any entrepreneur’s field of specialization.  He argued that knowledge can only go a long way in helping an entrepreneur to become successful.

However, Schumpeter viewed innovation along with knowledge as the main catalysts of successful entrepreneurship.  He believed that creativity was necessary if an entrepreneur was to accumulate a lot of profits in a heavily competitive market.

Many business people support this theory, and hence its popularity over other theories of entrepreneurship.

Schumpeter introduced a concept of innovation as key factor in entrepreneurship in addition to assuming risks and organizing factor of production. Schumpeter defines entrepreneurship as “a creative activity”. An innovator who brings new products or services into economy is given the status of an entrepreneur. He regards innovation as a tool of entrepreneur, The entrepreneur is viewed as the ‘engine of growth’, He sees the opportunity for introducing new products, new markets, new sources of supply, new forms of industrial organization or for the development of newly discovered resources. The concept of innovation and its corollary development embraces five functions:

Schumpeter is the first major theorist to put the human agent at the center of the process of economic development. He is very explicit about the economic function of the entrepreneur. The entrepreneur is the prime mover in economic development; his function, to innovate or carry out new combinations. Schumpeter makes a distinction between an innovator and an inventor. An inventor discovers new methods and new materials. On the contrary, an innovator is one who utilizes or applies inventions and discoveries in order to make new combinations. An inventor is concerned with his technical work of invention whereas an entrepreneur converts the technical work into economic performance. An innovator is more than an inventor because he does not only originate as the inventor does but goes much farther in exploiting the invention commercially. 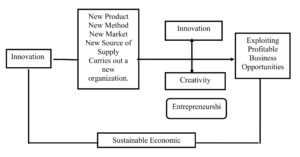 To Schumpeter, entrepreneurs are individuals motivated by a will for power; their special characteristic being an ­inherent capacity to select correct answers, energy, will and mind to overcome fixed talents of thoughts, and a capacity to withstand social opposition. The factors that contribute to the development of entrepreneurship would essentially be a suitable environment in grasping the essential facts. It can be noted that this theory’s main figure, the “innovating entrepreneur” has played an important role in the rise of modem capitalism. The entrepreneur has been the prime mover – for economic development process. On the criticism side, this theory seems one-sided as it puts too much emphasis on innovative functions. It ignores the risk taking and organizing aspects of entrepreneurship. An entrepreneur has not only to innovate but also assemble the resources and put them to optimum use. While stressing upon the innovative function of the entrepreneur, Schumpeter ignored the risk-taking function, which is equally important. When an entrepreneur develops a new combination of factors of production, there is enough risk involved. In spite of these lacking, the theory supports the “enterprising spirit” of entrepreneur to innovate. It is the act that endows resources with a new capacity to create wealth. Drucker says, “Innovation, indeed, creates a resource. It endows it with economic value.” Schumpeter’s views are particularly relevant to developing countries where innovations need to be encouraged. The transformation of an agrarian economy into an industrial economy required a great deal of initiative and changes on the part of businessmen and managers.