The price of a product is one of the most important determinants of its demand in the long run and the only determinant in the short run. The quantity of the product demanded by the consumer inversely depends upon the price of the product. If the price rise demand falls and vice versa. The relation between price and demand is called Law of demand. It is not only the existing price but also the expected changes in price which affect demand.

The demand for a commodity is also affected by the changes in the price of its related goods. Related goods may be substitutes or complementary goods. 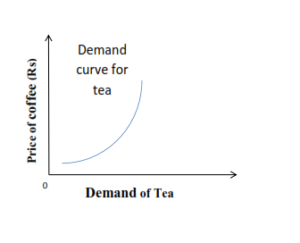 Assuming goods X and Y to be substitutes for one another, the demand function for X and Y with respect to the price of their substitutes can be written as follows:

Complementary goods are those goods which complete the demand for each other, such as car and petrol or pen and ink. There is an inverse or negative relationship between the demand for first good and price of the second which happens to be complementary to the first. For example an increase in the price of petrol causes a decrease in the demand of car and other petrol run vehicles, other things remaining same. The demand function for car (Dc) in relation to petrol (Pp) can be written as:

The relationship between the demand for a product (car) and the price of its complement (petrol) is shown in the figure below: 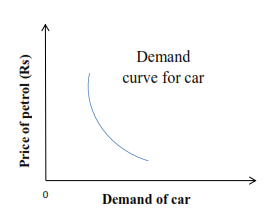 3. Income of the Consumer

Income is the basic determinant of quantity of product demanded since it determines the purchasing power of the consumer. Income as determinant of demand is equally important in both short run and long run. The relationship between the demand for a commodity say, X and the household income Y, assuming all other factors to remain constant, is expressed by a demand function such as :

Thus, relationship between income of the consumer and demand for a commodity is discussed with reference to : 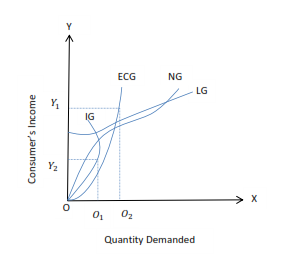 Essential consumer goods are those which serves the basic needs and are consumed by all persons of a society e.g. food grains, vegetable oils, cooking fuel, salt, minimum clothing, housing etc. Quantity demanded of this category of goods increases with increase in consumer’s income but only upto a certain limit, even though the total expenditure may increase in accordance with the quality of goods consumed, other factors remaining same. The relationship between goods of this category and consumer’s income is shown by the ECG curve in the below figure. As shown in the figure consumer’s demand for essential goods increases only until his income rises to  It tends to saturate beyond this level of income.

Inferior goods are those goods, the demand for which tends to decline with increase in consumer’s income and tends to increase with fall in his income. So there is an inverse relationship between income of the consumer and demand for the commodity. Inferior and superior goods are widely known to both consumers and sellers. For example every consumer knows that kerosene is inferior to cooking gas, travelling by bus is inferior to travelling by taxi. The relation between income and demand for an inferior good is shown by the curve IG in the figure. Demand for such goods rises only upto a certain level of income say  and declines as income increases beyond this level.

It  may be noted from the figure that upto certain level of income () the relation between income and demand for all types of goods is similar. The difference is only in degree.

All such goods that add to the pleasure and prestige of the consumer without enhancing his earning fall in the category of luxury goods. For example, stone studded jewellery, costly cosmetics, luxury cars, stay in 5 star hotels etc. can be treated as luxury goods. Demand for such goods arises beyond a certain level of consumer’s income.

Advertisement costs are incurred with the objective of promoting sale of the product. Advertisements help in increasing the demand in the following ways:

There are instances when advertisements have changed lifestyle of people. Cadbury India has revolutionized the market for its leading product Dairy Milk through high profile advertising featuring Amitabh Bachchan with a slogan “Kuch mitha ho jai”.  The relationship between sale (S) and advertisement outlays (AD) is expressed by the function.

The relationship between advertisement outlay and sales is shown in the figure given below: 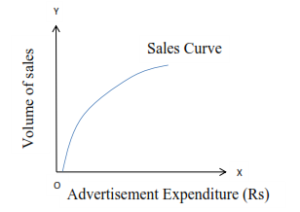 Consumers do not make purchases only on the basis of current price structure. Especially in case of durables, when demand can be postponed, consumers decide their purchase on the basis of future price and income. If they expect their income to increase or price to fall in future, they will postpone their demand on the other hand if they expect price to increase in future they will hasten the purchase. For example, purchase of cars and other durables increases before budget is announced if consumers fear that prices may rise after budget. Or, when people expect pay revisions, they wait for major purchases till pay is revised.

7. Population of the Country

When new commodities or new models of existing one appear in the market rich people buy then first. For example if new model of a car appears in the market, rich people would mostly be the first buyers. Some people buy new models of goods because they have genuine need for them or have excess purchasing power. Some others do so because they want to exhibit their affluence. But once new commodities are in vogue, many households buy then bot because they have a genuine need for them but because their neighbors have bought these goods. The purchase made by the latter category of the buyers arise out of such feelings as jealousy, competition and equality in peer group, social inferiority and the desire to raise their social status. Purchases made on account of these factors are the result of what economists call “demonstration effect” or the “ band- wagon effect”. These effects have positive effect on demand. On the other hand, when commodity becomes the thing of common use, some people mostly rich, decrease or give up the consumption of such goods. This is known as the “ Sob Effect”. It has a negative effect on the demand for the related goods.

Availability of credit to the consumers from the sellers, banks, relations and friends, or from other source encourages the cosnumers to buy more than what they would buy in absence of credit availability. That is why consumers who can borrow more can consume more than those who cannot borrow. Credit facility mostly affects the demand for durable goods, particularly those which require bulk payment at the time of purchase. The managers who are assessing the prospective demand for their products should, therefore take into account the availability of credit to the consumers.

Economy’s growth rate determines the general mood of business and general standard of living. If an economy is growing, it will have increased demands for goods of better quality. Consumers will have higher paying capacity and greater willingness to pay higher for quality. Thus producers will be under pressure to produce good quality products and add variety to their existing products.

13. Climate and weather of area

The climate of an area and the weather prevailing there have a decisive effect on consumer’s demand. In cold areas woolen cloth is demanded. During hot summer days, ice is very much in demand. On a rainy day, ice cream is not much demanded.