This model is the extension of hierarchical data model. In this model also there exist a parent child relationship but a child data element can have more than one parent element or no parent at all. The main difference of the network model from the hierarchical model is its ability to handle many –to – many (n: n) relationships or in other words it allows a record to have more than one parent.

Object oriented models were introduced to overcome the shortcomings of conventional models like Relational, Hierarchical and network model. An object oriented database is collection of objects whose behavior, state, and relationships are defined in accordance with object oriented concepts (such as objects, class, class hierarchy etc. ) 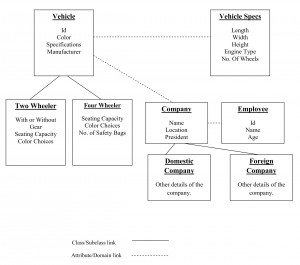 For above database structure a typical query may be “President’s and Company’s names for all companies that manufacture two wheeler vehicles and are located in Pune, India”.

The object-relational model is designed to provide a relational database management that allows developers to integrate databases with their data types and methods. It is essentially a relational model that allows users to integrate object-oriented features into it. Object relational model combine advantages of both modern object oriented programming languages with relational database features such as multiple views of data and high level non procedural query language. Some of these systems available I n market are IBM’s DB2 universal server, oracle corporations oracle 8, Microsoft Corporations SQL server 7 and so on.