It means the restoration of original structure and function, lost during the inflammation.

It implies filling up of gap created by the inflammation with non- functional scar tissue.

It implies the disappearance of the process of  inflammation and its replacement by either regeneration or repair or both in varying proportions.

Regeneration is the renewal of a damaged tissue or a lost appendage that is identical to the original one. Regeneration requires a population of stem or precursor cells with the potential to differentiate and replicated. The regeneration of injured cells and tissues involves cell proliferation which is driven by growth factors and is critically dependent on the integrity of the extracellular matrix.

Several  cell types proliferate during tissue repair. These include the remnants of the injured tissue, vascular endothelial cells and fibroblasts. The proliferation of these cell types is driven by proteins called growth factors. The production of polypeptide growth factors and the ability of cells to divide in response to these factors are important determinants of the adequacy of  the repair process. Biochemical signals draw the stem cells to sites where growth factors have created an environment for regeneration.

They induce cell proliferation by binding to specific receptors and affecting the expression of genes whose products typically have several functions.

Below is the list of few common growth factors along with their sources and functions:

The healing process is more or less identical in all types of tissue damage, be it inflammatory damage or injuries. The latter situation is covered by the term wound, which simply means damaged tissues generally by physical injury. Healing of wounds is not possible without the participation of inflammatory cells chemical mediators and blood vessels that are also the essential components of an inflammatory process.

The wound healing process is a dynamic one which can be divided into three phases. 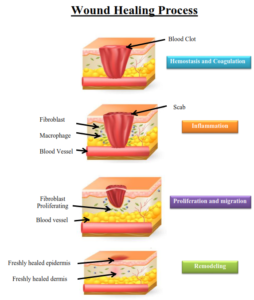 Healing of a wound begins with clot formation to stop bleeding and to reduce infection by bacteria, viruses and fungi. Clotting is followed by neutrophil invasion three to 24 hours after the wound has been incurred, with mitoses beginning in epithelial cells after 24 to 48 hours .

In the inflammatory phase, macrophages and other phagocytic cells kill bacteria, debride damaged tissue and release chemical factors such as growth hormones that encourage fibroblasts, epithelial cells and endothelial cells which make new capillaries to migrate to the area and divide.

Maturation is the final phase and occurs once the wound has closed. This phase involves remodeling of collagen from type III to type I. Cellular activity reduces and the number of blood vessels in the wounded area regress and decrease.