Device for detection of ionizing radiation by measuring the electric current generated when radiation ionizes the gas in the chamber and therefore makes it electrically conductive. The construction of a simple ionization chamber is shown below. 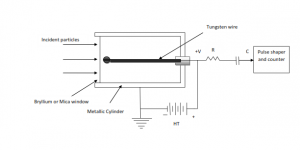 In this detector ions produced by an incident particle are collected by an electrostatic field. AN inert gas at suitable pressure is filled inside the chamber. The inert gas like Ar is used to minimize the losses of ions by recombination. When an energetic particle enters the chamber through window, ions are produced. Usually for  particles, particles,  Gamma particles and X rays energy is required to produce a pair of ions. The probability of production of a pair of ions is directly proportional to  where z is the change of incident particle and v is the velocity of particle.

Thus, the ionization current produced is proportional to the initial energy of the incident particle. Due to this reason, this can be used to distinguish between a low energy particle and a high energy particle. But if the two different particles of different energies enter simultaneously then it will not be able to produce a pulse corresponding to each particle rather a combined current pulse is produced.

A scintillation counter is very sensitive device used in nuclear physics for detection and measurement of high energy radiation. In principle, it is based on the fact that α-particles on striking a fluorescent material like zinc sulphide produce tiny flashes of light. These flashes are called scintillations and can be seen in the dark by adapted eye, or they can be detected by photomultiplier tube and amplifier. It is well known that when high energy charged particles pass through a transparent medium fluorescent light is produced all along its path. As the fast moving particle collides with atoms and molecules of the material, electrons are raised to excited energy levels, and while coming to their ground state they emit visible light or light in UV or Infrared region. For many plastics, this fluorescent light is blue or violet in color. The modern scintillation counter uses a scintillating crystal. Light from the crystal is incident on a photosensitive surface  called the photo cathode of a photomultiplier tube. The figure shows a scintillator mounted on a photomultiplier tube. The most important property of such an assembly is that the electric pulses produced are proportional to the energy of the incident  rays. Thus it is possible not only to detect the   rays but to measure their energy as well.