A firewall is an integrated collection of security measures designed to prevent unauthorized electronic access to a networked computer system.

A firewall is a hardware or software system that prevents unauthorized access to or from a network. It can be implemented in both hardware and software, or a combination of both. Firewalls are frequently used to prevent unauthorized Internet users from accessing private networks connected to the Internet. All data entering or leaving the intranet pass through the firewall, which examines each packet and blocks those that do not meet the specified security criteria.

Some of the basic functions of firewall are:

A firewall is a security mechanism to protect a local network from the threats it may face while interacting with other networks(Internet).It can be a hardware component or software component or both. 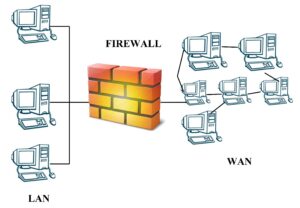 There are three basic types of  Firewalls

Network layer firewalls, also called packet filters, operate at a relatively low level of the TCP/IP protocol stack, not allowing packets to pass through the firewall unless they match the established rule set. A packet filter only examines traffic based on the packet header. The header includes such fields as the source and destination IP addresses, the source and destination ports, and the network protocol used. Packet filtering is usually employed on perimeter routers in the form of access control lists (ACLs) and is very fast and effective. It can be tedious to configure since rules must be defined for each protocol, range of addresses, and direction of flow. For example, consider the case where host A wants to talk to host B on TCP port 23. Both the desired rule and its reciprocal rule must be entered into the ACL

A proxy firewall is a network security system that protects network resources by filtering messages at the application layer. A proxy firewall may also be called an application firewall or gateway firewall.  A proxy server (running either on dedicated hardware or as software on a general-purpose machine) may act as a firewall by responding to input packets (connection requests, for example) in the manner of an application, while blocking other packets. A proxy server is a gateway from one network to another for a specific network application, in the sense that it functions as a proxy on behalf of the network user.