Gandhiji’s views on industrial relations are based on his fundamental principles of truth and non- violence, and non possession or aparigraha. Out of these principles evolved the concepts of non co-operation and trusteeship on which his philosophy of industrial relations rests. Gandhiji accepted the worker’s right to go on strike but they should exercise this right in a peaceful and non-violent manner. Workers should resort to strike for just cause and after the employers fail to respond to their moral appeals.  Gandhiji suggested that in the process of  resolving disputes, the following guidelines should be observed.

i. Workers should avoid forming unions in philanthropic organizations.

ii. Workers should seek redressal of their reasonable demands only through collective action.

iii. They should avoid strikes as far as possible in industries of essential service.

iv. Workers should resort to strikes only as a last resort after all other legitimate measures have failed.

v. If they have to organize a strike trade unions should see by ballot authority from all workers to do so, use non-violent methods and remain peaceful.

vi. When direct settlement fails, workers should, as far as possible, take resource to voluntary arbitration.

This approach holds that industrial relations besides having a sociological base does have some ethical ramifications. Good industrial relations can be only maintained when both the labour and management realize, their moral responsibility in contribution to the said task through mutual co-operation and greatest understanding of each other’s problems. It is not very widely accepted approach.

This approach was developed by John Dunlop. It focuses on participation in the process, environmental forces and output. It further studies the inter-relations among different participants of Industrial Relation System. According to him, Industrial system is a sub-system of the larger social systems. This system further includes subsystems like technology, market and people. 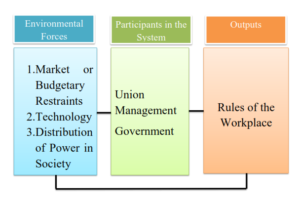 Click on the link below for notes on Industrial Relations

Click on the link below for notes on MBA/BBA

1 Comment so far. Feel free to join this conversation.