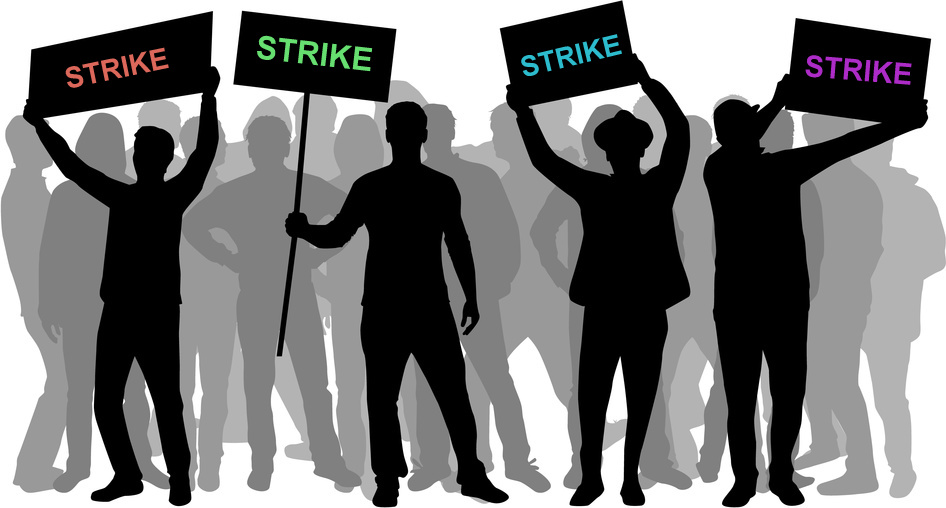 Meaning and Types of Strikes

Strike is a very powerful weapon used by a trade union to get its demands accepted. It means quitting work by a group of workers for the purpose of bringing pressure on their employer to accept their demands.

According to Industrial Dispute act, 1947

Strike means a cessation of work by a body of persons employed in any industry acting in combination, or a concerted refusal or a refusal under a common understanding, of any number of persons who are or have been so employed, to continue to work or to accept employment.

Following are the types of strike:

In this type of strike workers do not come to the workplace during the prescribed working hours. Instead they organize rallies d demonstrations with a view to drawing the attention of the employer to their grievances.

When workers do not leave their place of work, but stop doing work they are said to be on sit down strike. It is also known as tools down or pen down strike. The workers remain in their workplace and also keeps their control over the work facilities.

It is of a very short duration strike and is in the nature of a signal for the danger ahead. Such a strike is accompanied by threats of a strong dose of the direct action on the part of workmen and their purpose is simply to inform the employer about the feelings of the employees against any decision taken by him. The purpose is to exert moral persuasion rather than to precipitate a crisis. The intension is not to disrupt the business of the employer but to communicate to him the sentiments of the employees on the matter at issue.

This type of strike is suddenly announced generally by way of surprise without notice or at very short notice, and thereafter the issues in dispute are discussed. Usually such a strike takes place because of some provocation, and the real cause may be some discontent on the more fundamental issues involving employer-employee relations. Such strikes are generally legal except where a notice is required to be given and where the employer undertakes tomove for conciliation and adjudication.

Employees remain on their jobs under this type of strike. They do not stop work, but restrict the rate of output in an organized manner. They adopt go-slow tactics to put pressure on the employers.

Picketing is an act of posting pickets and implies marching or patrolling of workmen in front of the premises of the employer, carrying and displaying signs, banners and placards for the purpose of preventing others from entering he place. In other words it is watching and dissuading those who go to work during a strike. It is designed to give to the workers a method of drawing the attention of the public by advertising that there is a dispute between employer and labour. It is legal as long as no violence is involved.

Boycott aims at disrupting the normal functioning of the enterprise. It is an appeal for all voluntary withdrawl of co-operation, and so it is persuasive in nature, but negative in approach. On the other hand, picketing is positive in approach because it involves the taking if necessary and adequate measures to prevent the co-operation by others in the normal functioning and flow of business.

The term ‘Gherao’ denotes a collective action initiated by a group of workers under which members of the management of an industrial establishment are prohibited from leaving the business or residential premises by the workers who block their exit through human barricade. A human barricade is created in the form of the ring or a circle at the centre of whicj the persons concerned virtually remain prisoners of the persons who resort to gherao. All workmen guilty of  wrongfully restraining any person or wrongfully confiing him during gherao are guilty under Section 339 or 340 or the Indian Penal Code, of having committed a cognizable offence for which they be liable for punishment like simple imprisonment or fine.

A hunger strike is resorted to either by leaders of the union or by some workers all at a time or in small batches for a limited period or by all orker all together at some stage of dispute, the purpose being to create sympathy of the employer and to attract the attention of the public. The hunger strike for the redressal of any real or imaginary grievance is not a misconduct, provided that it is of a non-violent nature and is resorted peacefully.

It is a strike in which the striking workmen have no demands or grievances of their own against their employer but they may go on strike for the purpose of directly aiding or supporting others in their cause. In other words, the workers have no direct interest in the advancement of the cause of the strikers. Such a strike is an unjustifiable invasion of the rights of employers and is generally.

I got this website from my pal who told me about this web page and now this time...