Apart from the price of a product and its substitutes, consumer’s income is another basic determinant of demand for a product. The relationship between quantity demanded and income is of positive nature, unlike the negative price demand relationship. The demand for goods and services increases with increase in consumer’s income and vice-versa. The responsiveness of demand to the changes in income is known as income elasticity of demand.

The responsiveness of demand to change in income is termed as income elasticity of demand.

Income elasticity can be measured by the following formula: 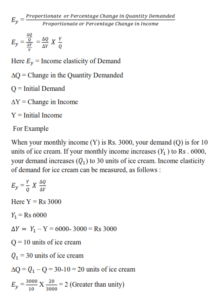 Importance of income Elasticity in Business

The rates at which incomes are rising in developed countries result in doubling of their incomes in a period of 20 – 25 years. Even in under developed countries like India, national income is growing though growth rate is not as steady as in the case of developed  countries. This rise in national income does not affect demand of various goods uniformly. From the point of view of the producers this effect is important as it helps them in relocating resources as among different industries. They would invest more in those industries where the income elasticity of demand is greater than unity , as demand for these products increases more than proportionately to income. It is on account of this reason that investment in a wide range of consumer durable goods like cars, scooters, televisions, washing machines, refrigerators etc. increases rapidly as a country progresses ad its national income rises. In case of industries with low income elasticity of demand the demand rises only slowly with income. Therefore investment in such industries also rises slowly. For goods with negative income elasticity of demand, demand declines as economic growth progresses.

The income elasticity helps in classifying the commodities. The following points may be noted in this regard.

i. When income elasticity is positive, the commodity is of normal type.

ii.When income elasticity is negative, the commodity is inferior.

iii. If income elasticity coefficient is positive and greater than one , the commodity is a luxury.

iv. If the income elasticity coefficient is positive but less than unity, the commodity is an essential one.

vi. If income elasticity coefficient is zero, the commodity is neutral.

On the basis of this classification, the producer/businessman decides what to produce, how much to produce and for whom to produce.