The barriers generally include tariff and non-tariff strategies. 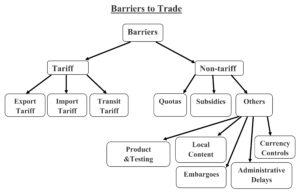 Tariffs may be either ad valorem or specific.Ad valorem tariffs are imposed as percentages on values of goods imported.Specific tariffs relate to some specific attributes of the goods-weight,quantity,and value.A compound tariff is also levied and is calculated partly as a percentage on value and partly as a rate per unit or weight.

Quotas refer to numerical limits on the quantity of goods that may be imported into a country during a specific period.The quantity of goods that may be imported is stated in license issued to a group of individuals or firms.The importer has to pay a penalty if the quantity imported exceeds the one specified in the license.Most countries use quotas to protect politically powerful or vulnerable industries,such as agriculture,textiles and motor vehicles,from the threat of foreign competition.With regard to textiles,countries placedquotas on imports under what is called multi-fiberarrangement, which is part of the GATT agreement.