Microbiologists use the term growth to indicate an increase in a population of microbes rather than an increase in size. Microbial growth depends on the metabolism of nutrients, and results in the formation of a discrete colony, an aggregation of cells arising from a single parent cell. A nutrient is any chemical required for growth of microbial populations. The most important of these are compounds containing carbon, oxygen, nitrogen, and/or hydrogen.All microorganisms require source of energy and hydrogen atoms or electrons for their growth and development. There are two sources of energy available to microorganisms, and based on this they are of two types:

Phototrophs – Energy for growth is derived from sunlight.

Chemotrophs – Energy for growth is derived from the oxidation of either organic and inorganic chemical compounds.

Microorganisms also have two sources for hydrogen atoms and electrons and based on that they can be grouped as:

Organotrophs : Source of electrons and hydrogen is organic compounds.

Although microorganisms show great metabolic diversity, yet most of them can be categorized in one of the four nutritional types based on energy, electrons or hydrogen and carbon sources. These types are :

Also called photoautotrophs as they use light as their source of energy and CO2 as their source of carbon. Some examples of this nutritional group  are the eukaryotic algae and cynobacteria, purple sulphur bacteria and green sulphur bacteria.Among these, eukaryotic algae and cynobacteria use water as the electron donor and release oxygen, whereas purple and green sulphur bacteria cannot oxidise water and thus, use the electrons from inorganic donors like hydrogen and hydrogen sulphide.

These are also called as chemoheterotrophs. They use organic compounds like sugars and amino acids as source of energy,hydrogen and carbon. The vast majority of pathogenic microorganisms are chemoheterotrophs.

They oxidise inorganic compounds like iron, sulphur or nitrogen to derive both energy and electrons for biosynthesis. Carbon dioxide is the carbon source for them. Few chemolihotrophs have been recognized to derive their carbon from organic sources and are called chemolithotrophic heterotrophs. Bacteria that obtain energy by utilizing inorganic electron donors but obtain most of their carbon from organic compounds are called mixotrophs. 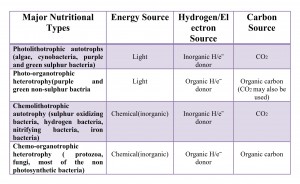 For more notes on Microbiology click on the link below: