In large and complex organizations most of the basic and strategic decisions are made by groups of managers rather than by individuals. Decisions relating to the determination of organizational objectives, and formulation of plans, strategies and policies fall in this category. Most of the large organizations make these decisions through their executive committees consisting of the chief executive and divisional and departmental heads.

Group decision making has become more widely prevalent during the past few decades because organizational problems have become so complex and need such a variety of specialized knowledge and abilities that no one person can handle them effectively. It permits the pooling of knowledge, abilities, skills, information and judgements which contribute to improvement in the quality of decisions. It also acts as mechanism for integrating varying viewpoints. Group decisions not only tend to be better decisions under proper conditions, but also more acceptable decisions.

1. There atleast two decisions makers acting jointly on the issue under decision making. The number of decision makers in a group can be more than two. However, the number of group members is kept upto manageable level so that proper interaction takes place among them in order to arrive at a decision.

If the policy guidelines are given, individual decision making will result into greater creativity as well as more efficiency. Where the problem requires a variety of expertise, group decision making is suitable.

Where organizational prescription makes it mandatory to go for group decision, the decision would be accepted only when it has been made by appropriate group for example, committee decision. In other cases also group decision is more accepted for implementation.

Group decision making generally leads to higher quality solutions unless an individual has expertise in the decision area this is identified in advance.

When posed with the need to solve a problem or make a decision, a group has a variety of decision-making techniques ranging from ordinary group interaction to improved techniques. Following techniques can be used in group decision making:

This technique was developed by Alex F Osborn, who has been called “the father of brainstorming”. The purpose of this approach is to improve problem solving by finding new and unusual solutions. In the brainstorming session, a multiplication of ideas is sought. The rules are as follows:
i. No ideas are ever criticized.
ii. The more radical the ideas are, the better.
iii. The quantity of idea production is stressed.
iv. The improvement of ideas by others is encouraged.

“A conference technique by which a group attempts to find a solution for a specific problem by amassing all the ideas spontaneously contributed by its members. “

For brainstorming, a group of 10 to 15 persons is constituted. The participants should be connected with the problem directly or closely, though they need not necessarily be from the same discipline. The process in brainstorming goes in the following ways:
i. The problem in which decision is required is given to the group. Problems stated clearly and precisely so that members of the group can focus their direct attention on it.
ii. Each member is asked to give ideas through which the problem can be solved. Here, the focus is on quantity of ideas and quality may follow later. The brainstorming session is means t to be a free, frank and relaxed one to generate maximum number of ideas irrespective of qualities.
iii. The members are expected to put their ideas for problem solution without taking into consideration any limitations- financial, procedural, legal, organizational or otherwise. Such limitations only act as deterrent to free flow of ideas because the participants will limit themselves in thee limitations.
iv. Idea-evaluation is deferred to a later stage because it does not flow in the direction of idea generation. Hence, any criticism, judgement or comment is strictly prohibited and the members are told to abstain from it.

Although brainstorming is useful for all types of decisions, it is more useful for simple, well-defined problems. It encourages enthusiasm and a competitive spirit among members in generating ideas, it also prevents group embers from feeling hopeless regarding the range of possibilities in a given situation. Though brainstorming can result into many shallow and useless ideas, it can spur members to offer new ideas as well.

Nominal group decision making technique restricts discussion or interpersonal communication during the decision-making process, hence the term nominal. Group members are all physically present, as in a traditional committee meeting, but members operate independently. Specifically, a problem requiring decision is presented and then following steps take place:
i. Members meet as a group but before any discussion takes place, each member independently writes down ideas on the problem.
ii. After this silent period, each member presents one idea to the group. Each member takes a turn, presenting a single idea until all ideas have been presented and recorded. No discussion takes place until all ideas have been recorded.
iii. Each group member silently and independently rank-orders the ideas. The idea with the highest aggregate ranking determines the final decision.

The Nominal Group Technique is widely used in health, service, industry, education and government organizations. This technique encourages creativity, prevents strong personality types from dominating the group, encourages continued exploration of the issues, provides a forum for the expression of the minority viewpoints, and gives individuals some time to think about the issues before offering solutions.

In Delphi Technique of decision making, members do not have face-to-face interaction for group decision. The decision is arrived at through written communication in the form of filling up questionnaires often through mails. In the conventional Delphi, a small group designs a questionnaire which is completed by a large respondent group. The results are then tabulated and used in developing a revised questionnaire which is completed by the larger group. The results of the original polling are fed back to the respondent group to use in subsequent respondents. This procedure is repeated until the issues are narrowed, responses are focused or consensus is reached.

i. Usually all participants remain anonymous. Their identity is not revealed, even after the completion of the final report.

ii. The initial contributions from the experts are collected in the form of answers to questionnaires and their comments to these answers. The panel director controls the interactions among the participants by processing the information and filtering out irrelevant content. This avoids the negative effects of face-to-face panel discussions and solves the usual problems of group dynamics.

iii. The Delphi Method allows participants to comment on the responses of others, the progress of the panel as a whole, and to revise their own forecasts and opinions in real time.

iv. The person coordinating the Delphi method is usually known as a facilitator or Leader, and facilitates the responses of their panel of experts, who are selected for a reason, usually that they hold knowledge on an opinion or view.

Delphi technique is quite useful where the problem does not lend itself to precise analytical techniques but can benefit from subjective judgements on a collective basis and members who may be experts in the area of problem may not be able to have face-to-face interaction. For example, what will be the trend of fashion in next year, the decision can be arrived at through Delphi technique.

Dialectical method, is a discussion between two or more people holding different points of view about a subject but wishing to establish the truth through reasoned argumentation.
One of the common problems in group decision making is that group members come together too quickly on one alternative while overlooking which may be more promising than the one chosen. This may happen because they want to avoid frequent group meetings or they may lack willingness to raise and confront tough issues.
In order to overcome this problem, dialectic decision method (DDM) has been evolved.

i. A clear statement of a problem to be solved is presented.

ii. Based on this statement, alternative proposals are generated and participants identify the explicit and implicit assumptions underlying each proposal.

iii. The group then breaks into advocacy sub-groups to study the proposals in the light of the problem.

iv. The entire group meets after this exercise for the final choice. The choice may be made in terms of a particular proposal based on its pros and cons, or there may be compromise of different proposals, or new alternatives may be proposed.
The following figure depicts the DDM where only two alternatives have been proposed for the sake of simplicity. In practice there may be so many alternatives. 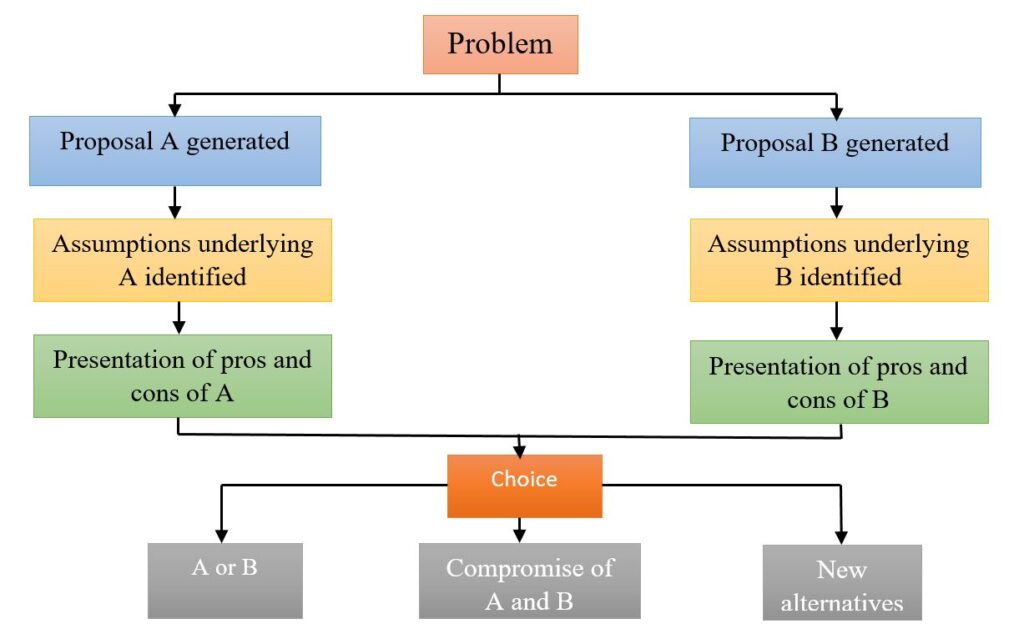 This method generated better understanding of the proposals, their underlying assumptions and the pros and cons. The group members are likely to feel more confident about their choices. However, it suffers from one weakness in the form of propensity to forge a compromise. Sometimes this compromise may not be based on actual pros and cons of a proposal but may be affected by the debating skills of the participants.