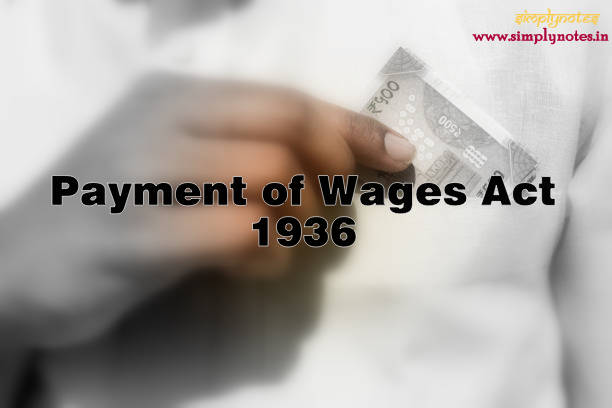 Objects of the Act

The preamble of the Act lays down its object as an Act to regulate the payment of wages to certain classes of persons employed in industry. The regulation contemplated by the Act is related to

Application of the Act

The Payment of Wages Act, 1936 is applicable to whole of India. it applies in the first instance to the payment of wages to :

The Scheme of the Act

The Act is divided into following 26 Sections:

(2) It extends to the whole of India.

(3) It shall come into force on such date as the Central Government may by notification in the Official Gazette appoint.

(5) The State Government may after giving three months’ notice of its intention of so doing by notification in the Official Gazette extend the provisions of this Act or any of them to the payment of wages to any class of persons employed in any establishment of class of establishments specified by the Central Government or a State Government under sub-clause (h) of clause (ii) of section 2:

Provided that in relation to any such establishment owned by the Central Government no such notification shall be issued except with the concurrence of that government.

(6) Nothing in this Act shall apply to wages payable in respect of a wage-period which over such wage-period average one thousand six hundred rupees a month or more.

(ia) “employer” includes the legal representative of a deceased employer;

(ib) “factory” means a factory as defined in clause (m) of section 2 of the Factories Act 1948 (63 of 1948) and includes any place to which the provisions of that Act have been applied under sub-section (1) of section 85 thereof;

(ii) “industrial or other establishment” means any –

(a) tramway service or motor transport service engaged in carrying passengers or goods or both by road for hire or reward;

(aa) air transport service other than such service belonging to or exclusively employed in the military naval or air forces of the Union or the Civil Aviation Department of the Government of India;

(b) dock wharf or jetty;

(d) mine quarry or oil-field;

(f) workshop or other establishment in which articles are produced adapted or manufactured with a view to their use transport or sale;

(g) establishment in which any work relating to the construction development or maintenance of buildings roads bridges or canals or relating to operations connected with navigation irrigation or to the supply of water or relating to the generation transmission and distribution of electricity or any other form of power is being carried on;

(h) any other establishment or class of establishments which the Central Government or a State Government may having regard to the nature thereof the need for protection of persons employed therein and other relevant circumstances specify by notification in the Official Gazette.

(iv) “prescribed” means prescribed by rules made under this Act;

(a) any remuneration payable under any award or settlement between the parties or order of a court;

(b) any remuneration to which the person employed is entitled in respect of overtime work or holidays or any leave period;

(c) any additional remuneration payable under the terms of employment (whether called a bonus or by any other name);

(d) any sum which by reason of the termination of employment of the person employed is payable under any law contract or instrument which provides for the payment of such sum whether with or without deductions but does not provide for the time within which the payment is to be made;

(e) any sum to which the person employed is entitled under any scheme framed under any law for the time being in force, but does not include –

(1) any bonus (whether under a scheme of profit sharing or otherwise) which does not form part of the remuneration payable under the terms of employment or which is not payable under any award or settlement between the parties or order of a court;

(2) the value of any house-accommodation or of the supply of light water medical attendance or other amenity or of any service excluded from the computation of wages by a general or special order of the State Government;

(3) any contribution paid by the employer to any pension or provident fund and the interest which may have accrued thereon;

(5) any sum paid to the employed person to defray special expenses entailed on him by the nature of his employment; or

(6) any gratuity payable on the termination of employment in cases other than those specified in sub-clause (d).

Section 3. Responsibility for payment of wages

Every employer shall be responsible for the payment to persons employed by him of all wages required to be paid under this Act:

(1) Every person responsible for the payment of wages under section 3 shall fix periods (in this Act referred to as wage-periods) in respect of which such wages shall be payable.

(2) No wage-period shall exceed one month.

Section 5. Time of payment of wages

(1) The wages of every person employed upon or in –

(a) any railway factory or industrial or other establishment upon or in which less than one thousand persons are employed, shall be paid before the expiry of the seventh day,

(b) any other railway factory or industrial or other establishment shall be paid before the expiry of the tenth day, after the last day of the wage-period in respect of which the wages are payable:

Provided that in the case of persons employed on a dock wharf or jetty or in a mine the balance of wages found due on completion of the final tonnage account of the ship or wagons loaded or unloaded as the case may be shall be paid before the expiry of the seventh day from the day of such completion.

(2) Where the employment of any person is terminated by or on behalf of the employer the wages earned by him shall be paid before the expiry of the second working day from the day on which his employment is terminated:

Provided that where the employment of any person in an establishment is terminated due to the closure of the establishment for any reason other than a weekly or other recognised holiday the wages earned by him shall be paid before the expiry of the second day from the day on which his employment is so terminated.

(3) The State Government may by general or special order exempt to such extent and subject to such conditions as may be specified in the order the person responsible for the payment of wages to persons employed upon any railway (otherwise than in a factory) or to persons employed as daily-rated workers in the Public Works Department of the Central Government or the State Government from the operation of this section in respect of wages of any such persons or class of such persons:

Provided that in the case of persons employed as daily-rated workers as aforesaid no such order shall be except in consultation with the Central Government.

(4) Save as otherwise provided in sub-section (2) all payments of wages shall be made on a working day.