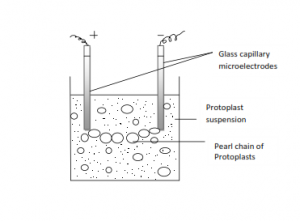 Two or more protoplasts are brought into more proximity. The adhesion can be induced by variety of treatments e.g PEG, high PH and high Ca++ ions.

Membranes of protoplasts agglutinated by fusogen get fused at the point of adhesion. It results in the formation of cytoplasmic bridges between the protoplasts.Plant protoplasts caeey a negative charhe from -10 to -130 mV. Due to commom charge, the plasma membranes of two agglutinated protolasts do not come close enough to fuse. Fusion requires that membranes must be first brought close together at a distance of 10 Å or less. The high pH high Ca ++ ions treatment has shown to neutralize the normal surface charge so that agglutinated protoplasts can come in intimate contact. PEG agglutinates to form clumps of protplasts. Tight adhesion may occur over a large or small localized area. When PEG molecules chain is large enough it acts as a molecular bridge between the surface of adjacent protoplasts and adhesion occurs.

Rounding off of the fused protoplsts due to the expansion of cytoplasmic bridges forming spherical heterokaryon or homokaryon. 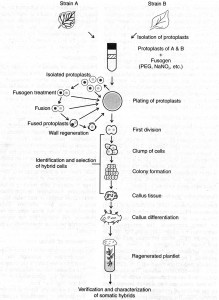 The protoplast suspension recovered after a treatment with a fusion inducing agent (fusogen) consists of the following cell types:

(i) unfused protoplasts of the two species/strains,

(ii) products of fusion between two or more protoplasts of the same species (homokaryons), and

(iii) ‘hybrid’ protoplasts produced by fusion between one (or more) protoplast(s) of each of the two species (heterokaryons). 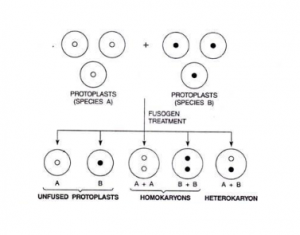 In somatic hybridization experiments, only the heterokaryotic or ‘hybrid’ protoplasts, particularly those resulting from fusion between one protoplast of each of the two fusion partners, are of interest.

However, they form only a small proportion of the population (usually 0.5-10%). Therefore, an effective strategy has to be employed for their identification and isolation. This step is called the selection of hybrid cells, is the most critical, and is still an active area of investigation.

Some important selection procedures are discussed below:

The selection of hybrids of Nicotiana glauca and N. langsdorffi is based on auxin autotrophy of the hybrid cells. The parental protoplast or cell requires an auxin compounds in order to proliferate, whereas hybrid callus tissue needs no such requirements because cells are auxin autotrophic. Therefore, somatic hybrid cells can be isolated selectively by growth on auxin free culture medium. Auxin autotrophy of the hybrid cell is expressed only as a result of the genetic combination of two parental protoplasts. 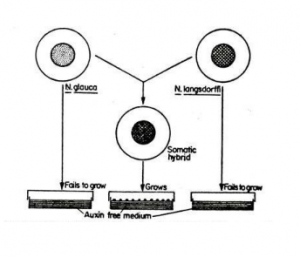 2.  Use of Genetic Complementation:

Melcher and Lalib (1974) first used genetic complementation to isolate green somatic hybrids following fusion of two distinct homozygous haploid recessive albino mutants of Nicotiana tabacum. A population of albino protoplasts are fused with either a population of protoplasts isolated from a second non-allelic albino mutant or with a population of normal mesophyll protoplasts. In this process, the parental protoplasts form the albino colony whereas the hybrid protoplast will produce either light green or green colony. This can be usually distinguished at the cultural level. In addition, morphological markers can also be used in combination with the genetic complementation.

3. Use of Uncommon Amino Acid:

Attempts have also been made to utilise uncommon amino acid as selective agents, conavalin which is present in some legumes, inhibits division of soybean and pea cells but sweet clover and alfalfa are unaffected. Heterocaryon obtained by the fusion of protoplast from soybean with those from any one of the resistant plant will divide in presence of Conavalin.

4. Use of Cells Resistant to Amino Acid Analog:

A number of cell lines resistant to amino acid analogs have been isolated and are used routinely for the selection of hybrid cells following protoplast fusion. For example , using cell lines resistant to 5-methyl –tryptophan ( 5-MT) and S-2 amino ethyl-cystein (AEC) , the Interspecific hybrids of Nicotiana sylvestris are selected after protoplast fusion using medium containing both amino acid analogs.

In case of Daucus, two different cell lines have been raised for the selection of hybrid cells. A non-regenerating cell lines of D. carota is resistant to 5-MT and azetidine 3- carboxylate ( AZC), whereas a totipotancy wild type of D. capillifolius is sensitive to 5-MT. Hybrid colonies are selected by growth on 5-MT added medium and their to form plant through embryogenesis.

Some well known fungal toxin may be used in selecting the fusion product. For example, the protoplast of cultured soybean cells resistant to Hm T toxin produced by Helminthosporium maydis race T, whereas the leaf protoplasts of Zeamays are sensitive to this toxin. It has been observed that fusion product of soybean and Zeamays survive on toxin containing medium.

The drug Actinomycin D has been used in the selection of somatic hybrids of two Petunia species. The cells from fusion product of protoplasts from P.parodii and P.hybrida can give rise to the complete plant via callus formation. The cell of P. hybrida fails to grow in the presence of Actinomycin D.

7. Use of Auxotrophic Mutant:

Auxotrophic mutants have been successfully used to isolate hybrid protoplast in Spherocarpus donnelii. Hybrids obtained by fusion of protoplasts from nicotinic acid and glucose requiring mutants are selected on the minimal media. The regenerated hybrid plants are identified on the basis of morphology and karyotype.