“It is complete set of states including start and goal states, where the answer of the problem is to be searched”.

“It is the question which is to be solved. For solving the problem it needs to be precisely defined. The definition means, defining the start state, goal state, other valid states and transitions”.

A state space representation allows for the formal definition of a problem which makes the movement from initial state to the goal state quite easily. So we can say that various problems like planning, learning, theorem proving etc. are all essentially search problems only.

State space search is a process used in the field of computer science, including artificial intelligence (AI), in which successive configurations or states of an instance are considered, with the goal of finding a goal state with a desired property.

The eight tile puzzle consist of a 3 by 3 (3*3) square frame board which holds 8 movable tiles numbered 1 to 8. One square is empty, allowing the adjacent tiles to be shifted. The objective of the puzzle is to find a sequence of tile movements that leads from a starting configuration to a goal configuration.

The states of 8 tile puzzle are the different permutations of the tiles within frame.

Lets do a standard formulation of this problem now.

States: It specifies the location  of each of the 8 tiles and the blank in one of the nice squares.

Goal :  Many goal configurations are possible one such is shown in the figure

Legal moves ( or state) : They generate legal states that result from trying the four actions-

Path cost: Each step costs 1, so the path cost is the number of steps in the path.

The tree diagram showing the search space is shown in figure. 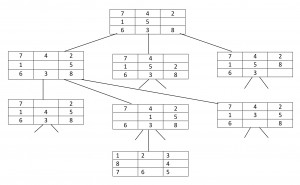