What is Citizenship Amendment Act? Why some people are protesting against it?

Donald Trump as President of US

Donald Trump is a billionaire real estate tycoon and television personality. Trump is Chairman and President of The trump Organization, an international conglomerate based in Trump Power in Midtown Manhattan, New York City. Donald Trump has been elected as the 45th President of the United States of America on 9 November, 2016 beating Democratic representative Hillary Clinton by a clear margin.

Donald John Trump was born on June 14, 1946 in Queens, New York. He is the fourth of five children of Frederick Trump and Mary Anne Trump. Trump is of German ancestry on his paternal side and Scottish ancestry on his maternal side. All four of his grandparents were born in Europe.

Trump left the school at the age of 13 and was enrolled in the New York Military Academy (NYMA) where he finished his high school. Trump graduated from Wharton in May 1968 with bachelor of Science in Economics. Prior to graduating from college, Trump began his real estate career at his father’s company. In 1971, Donald Trump was given control of the company, which he later renamed the Trump Organization. Trump’s first big deal in Manhattan was development of  Grand Hyatt Hotel in 1978. In 1983, Trump completed development of Trump Tower on Fifth Avenue in Midtown Manhattan which is a 58 story skyscraper.

In 1990 the real estate market declined, reducing the value and income of Trump’s empire to $500 million. Yet Trump climbed back and had worth close to $2 million in 1997.

Trump’s first wife was Ivana Marie Zehnickove Ivan Trump was born on Feb 20, 1949. She started skiing at the age of 6 and continued it during college also. She earned master’s degree in physical education and also studied decorating and business, which later proved to be useful to The Trump Empire. 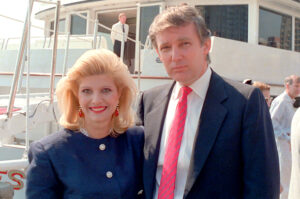 She started her modeling career in 1970s. She married Donald Trump in 1997 and had three children together- Donald Jr., Ivanaka and Eric. Ivana had always been a powerful support to Donald. She was Vice President of interior design for Trump Organisation and President  of Trump Castle Hotel and Casino. In early 1980’s Ivana wanted to take break from work for her three children. It was then when Marla, a beauty pageant winner lure Donald trump into serious affair. Marla was just at that time and Donald was 40. Ivana separated from her husband in 1990 due to rumours of his affair with Marla Maples. He lost his reputation as a respectable businessman. In 1993 he married Marla Maples and their union lasted six years. Both had one daughter together named Tiffany Trump. 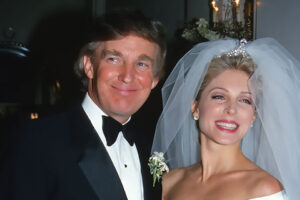 As soon as he divorced Marla, Donald started promoting Melania’s modeling career. People have speculated that Donald was seeing Melania being still married to Marla. Both married in 2005 and have one son together. 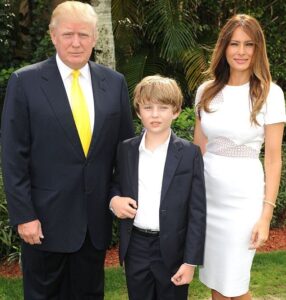