Business cycle, the periodic booms and slumps in economic activities are generally compared to ‘ebb and flow’. The ups and downs in the economy are reflected by the fluctuations in aggregate economic magnitudes, including production, investment, employment, prices, wages, bank credits etc. the upward and downward movements in these magnitudes show different phases of business cycles. Basically, there are only two phases in a cycle, viz., prosperity and depression. However, considering the intermediate stages between prosperity and depression, the various phases of trade cycle may be enumerated as follows:

2. Peak of boom or prosperity

4. Trough, the bottom of depression and

The five phases of a business cycle are presented in the following figure: 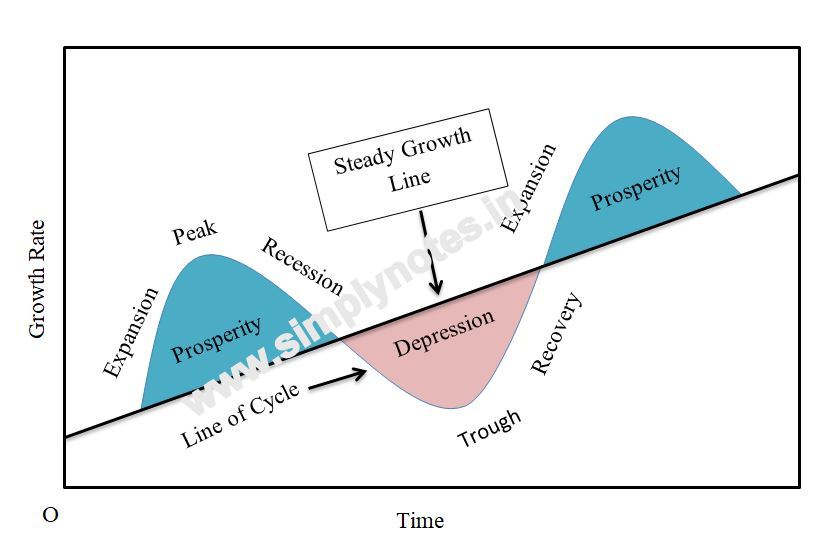 As the term itself denotes, this is a phase when all macro economic variables like output, employment, income and consumption increase. At the same time, prices move up, money supply increase, and the self reinforcing feature of business cycle pushes the economy upward.

This is the highest point of growth; hence it is referred to as peak or boom in a business cycle. It is characterized by increased national output, rise in consumer and capital expenditure, rise in  prices of raw material and finished goods, and rise in level of employment. Inventories of both input and output increase. Debtors find it more and more convenient to pay off debts. Bank advances grow rapidly even though bank rate increases. There is general expansion in credit. This is the stage beyond which no further expansion is possible, and it is that phase which sees the downwards turning point. In reality a process of growth cannot continue indefinitely, after some time it slows down and thus a turning point comes in the economy.

Once the peak is reached, there starts the recession. In this stage, there starts a slow-down in the economic activity. The prices are too high and there is a fall in demand. The profits start decreasing. There is a contraction in credit. The expansion in business and production stops. The expansion in the economy comes to a standstill. In general, a recession continues for short time.

When the economy starts moving from depression to an expansion, the recovery phase starts. Economic activity starts rising. Business confidence among produces and businessmen is growing. During this period, producers are encouraged to produce more products to satisfy the new orders placed by businessmen. Employment and income of the people increase. As a result, demand for products in employment and income also leads to an increase in the demand for consumer products. Thus, every industry improves and recovers from the effects of depression. The economy starts recovering and moves towards the phase of prosperity. Hence, the business cycle is repeated.