The term business ethics refers to the system of moral principles and rules of conduct applied to business. Business ethics means that the business should be conducted according to certain self-recognized moral standards. Business, being a social organ, shall not conduct itself in a way detrimental to the interests of society and the business sector itself. 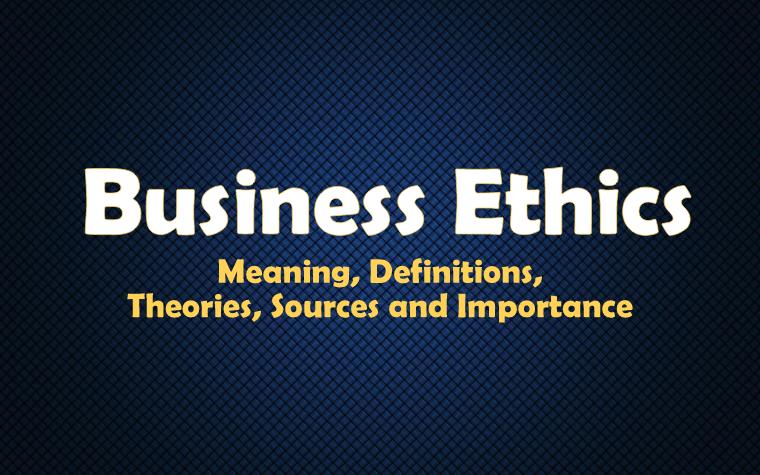 A profession is bound by certain ethical principles and rules of conduct which reflect its responsibility, authority and dignity. The professionalization of business management should, therefore, be reflected in the increasing acceptance of business ethics.
There is, however, no unanimity of opinion on what constitutes business ethics. In this connection, Peter Drucker very appropriately remarks.’ “There neither is a separate ethics of business, not is one needed.’’ For “men and women do not acquire exemption from ordinary rules of personal behaviour because of their work or job. Nor, however, do they cease to be human beings when appointed vice-president, city manager, or college dean. And there have always been a number of people who cheat, steal, lie, bribe or take bribes. The problem is one of moral values and moral education of the individual, of the family, of the school”.

One is inclined to agree with Drucker that every individual and organ in society should abide by certain moral codes, and that there is no separate ethics of business.However, certain norms and principles of conduct have been commonly advocated as constituting business ethics.

Ethics has been defined as follows:

“Ethics refer to a set of moral principles which should play a very significant role in guiding the conduct of managers and employees in the operation of any enterprise.”

Freeman views that ethics include people’s rights and duties as well as moral rules that people apply in making decisions. Thus, ethics is concerned with what is right or wrong in human behaviour. It is normative and prescriptive, and not neutral. On the basis of its definition, we can identify the features of ethics which are as follows.

1. Ethics is involved in all types of human, behaviour, whether in business context or other context.

3. Ethics is a social phenomenon. Since different societies differ in terms of their norms, what constitutes an ethical behaviour in a society may be treated as unethical behaviour in other societies. For example, artificial birth control is mandatory in China but a taboo in Catholic Christian society.

4. Ethics does not rest on feelings of approval or disapproval but on the careful examination of the reality of the society. For example, it may be unpleasant (a kind of feeling) to fire an employee hut ethics may demand just that. In fact, principles, and not feelings, give us ethics.

Based on these features of ethics, business ethics may be defined as the moral principles which should govern business activities. Some examples of business ethics are as follows:

1. To give fair and equitable treatment to the employees.

2. To charge fair prices from the customers.

3. To use fair weights for measurement of commodities.

4. To pay taxes to government and other bodies honestly.

6. To become a good corporate citizen.

Two theories are pertinent when one talks about the nature of ethics.

i. The theory of moral unity essentially advocates the principle that business actions should be judged by the general ethical standards of society. There exists only one ethical standard that applies to business and to non-business situations.

ii. Opposed to the theory of moral unity is the theory of amorality which argues that business can be amoral, and the actions of business men need not be guided by general ethical standards. Managers may act selfishly because the market mechanism distills their actions into benefits to shareholders and society at large. Adam Smith argued that the ‘invisible hand’ of the market assures that by “ pursuing ho sown interest (a merchant) frequently promotes that of the society more effectively than when he really intends to promote it.” In this way, capitalism provides moral justification for the pursuit of profit through behavior which is not purposefully ethical.
However, the theory of amorality is not acceptable to anybody. Everyone agrees that business actions should be subject to the same ethical standards as the one applicable to the society in general.