Just as a barometer indicates changes in atmospheric pressures, certain indicators can be identified which can show the direction in which business winds are blowing. This method was first developed and used in the 192-s by the Harvard Economic Service. This technique is based on the notion that the future can be predicted from certain happenings in the present. It is based on the observation that certain statistical indicators, when used in conjunction with one another, serve as a barometer of economic changes. For example, index of share prices is many times used to predict economic changes. Certain indices like the index of share-prices, or the index of food grains prices or that of cloth prices do indicate business trends and can be taken to suggest a general economic recovery or good prospects or, alternatively, recession or bad prospects. What a firm needs to do is to establish a relation between general economic conditions and the demand for its own product.
The basic approach of barometric techniques is to construct an index of relevant economic indicators and to forecast trends on the basis of movements in the index of economic indicators.
The two kinds of indicators that are used under barometric method of demand forecasting are:

(a)  Lead-Lag Indicators
The basic approach of lead-lag indicators technique is to construct an index of relevant ecowomzc indicators and to forecast future trends on the basis of movements in the index of economic indicators. The indicators used in this method are classified as:
(i) leading indicators,
(ii) coincidental indicators, and
(iii) lagging indicators.

A time-series of various indicators is prepared to read the future economic trend. The leading series consists of indicators which move up or down ahead of some other series. Some examples of the leading series are: (i) index of net business or capital formation; (ii) new orders for durable goods; (iii) new building permits; (iv) change in the value of inventories; (v) index of the prices of the materials; (vi) corporate profits after tax.

The coincidental series, on the other hand, are the ones that move up or down simultaneously with the level of economic activity. Some examples of the coincidental series are: (i) number of employees in the non-agricultural sector; (ii) rate of unemployment; (iii) gross national product at constant prices; (iv) sales recorded by the manufacturing, trading and the retail sectors.

The lagging series, consists of those indicators which follow a change after some time-lag. Some of the indices that have been identified as lagging series by the NBER are: (i) labour cost per unit of manufactured output, (ii) outstanding loans, and (iii) lending rate for short-term loans.

Let us say, by way of example, that retail prices of cloth or demand for cement or per capita income are some of the indicators. Any one of them which we deem to be the best can be chosen. Let us take that indicator and call it X. Let us suppose the demand for our product is Y. We can now observe: If we observe that the demand for our product, i.e. Y. increases after a gap of three months or six weeks or a fortnight following an increase in the indicator X, then X becomes a leading indicator. If both X and Y rise and fall together, X becomes a coincident indicator. If Y increases first and X increases after wards (may be after a fortnight or three months etc.), X becomes a lagging indicator. Obviously, only leading indicators are useful to us because with their help, we can predict changes in demand for our product on the basis of changes in the leading indicator, in advance.
The time series data on various kinds of indicators are selected on the basis of the following criteria:
(i) Economic significance of the indicator: the greater the significance, the greater the score of the indicator.
(ii) Statistical adequacy of time-series indicators: a higher score is given to an indicator provided with adequate statistics.
(iii) Conformity with overall movement in economic activities.
(iv) Consistency of series to the turning points in overall economic activity,
(v) Immediate availability of the series, and
(vi) Smoothness of the series.

The relative positions of leading, coincident and lagging indicators in the business cycle are shown graphically in the following figure:

Merits
i. The only advantage of the barometric method of forecasting is that is helps to overcome the problem of finding the value of an independent variable under regression analysis.

Limitations
i. This techniques can be used only if one gets an adequate number of leading indicators and a leading indicator of the variable to be forecast is not always easily available.
ii. This method can be used for short-term forecasts only.
iii. These indicators signal the direction of change, but not the magnitude. Actually how much will be the rise or fall in demand for one’s product is more important.

Suppose we have to forecast demand for sugar for 2008 on the basis of 7-year data given in Table 6.4. When this data is graphed, it will produce a continuously rising trend in demand for sugar with rising population. This shows a linear trend. Now, the demand for sugar in 2008 can be obtained by estimating a regression equation of the form

where Y is sugar consumed, X is population, and a and b are constants.

For an illustration, consider the hypothetical data on quarterly consumption sugar given in Table given below:

The procedure of calculating the terms in equations (i) and (ii) above is presented in Table below: 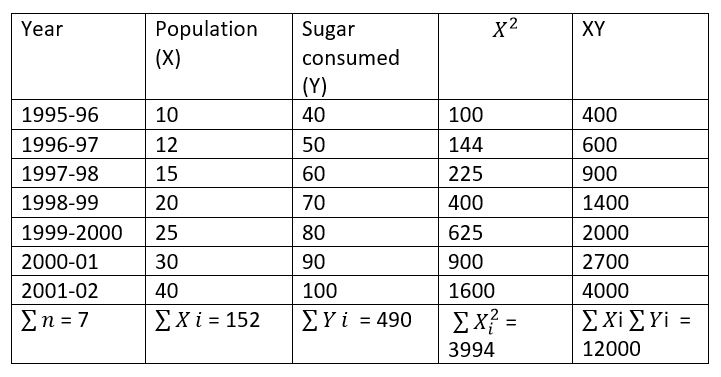 The multi-variate regression equation is used where demand for a commodity is deemed to be the function of many variables or in cases in which the number of explanatory variables is greater than one.
The procedure of multiple regression analysis may be briefly described here. The first step in multiple regression analysis is to specify the variables that are supposed to explain the variations in demand for the product under reference. The explanatory variables are generally chosen from the determinants of demand, viz., price of the product, price of its substitute, consumers’ income and their taste and preference. For estimating the demand for durable consumer goods, (e.g., TV sets, refrigerators, houses, etc.), the other explanatory variables which are considered are availability of credit and rate of interest. For estimating demand for capital goods (e.g., machinery and equipment), the relevant variables are additional corporate investment, rate of depreciation, cost of capital goods, cost of other inputs (e.g., labour and raw materials), market rate of interest, etc.
Once the explanatory or independent variable are specified, the second step is to collect time-series data on the independent variables. After necessary data is collected, the next step is to specify the form of equation which can appropriately describe the nature and extent of relationship between the dependent and independent variables. The final step is to estimate the parameters in the chosen equations with the help of statistical techniques. The multi-variate equation cannot be easily estimated manually. They have to be estimated with the help of computer.

The simultaneous equations method is a complete and systematic approach to forecasting. This technique uses sophisticated mathematical and statistical tools .

The second step in this method is to collect the necessary data on both endogenous and exogenous variables. More often than not, data is not available in the required form. Sometimes data is not available at all. In such cases, data has to be adjusted or corrected to suit the model and, in some cases, data has even to be generated from the available primary or secondary sources.
After the model is developed and necessary data are collected the next step is to estimate the model through some appropriate method. Generally, a two-stage least square method is used to predict the values of exogenous variables.