The term oligopoly has been applied to an industry that consists of a few firms, each producing a substantial share of the total output of that industry. This type of market structure is typical of the petroleum industry, the automobile industry, or the iron and steel industry. If the industry consists of only two firms, the term duopoly is used. 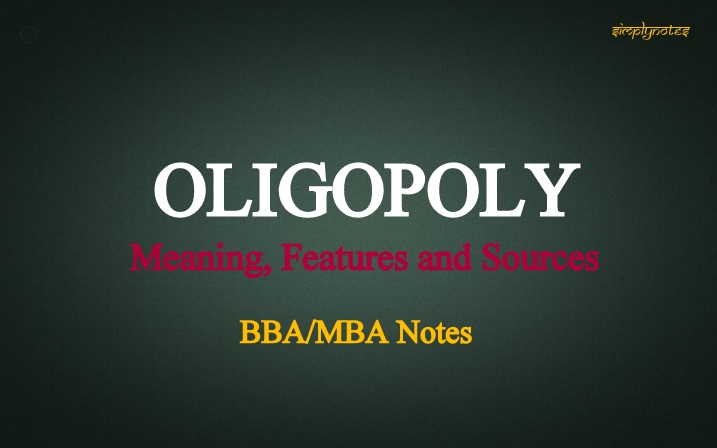 The main features of oligopoly are the following:

i. A few firms
The industry consists of only a few firms—so few that each produces a relatively large share of the total output of the industry. An oligopolistic industry generally consists of 2 to 15 firms.

vi. Non-Price Competition
Oligopolies tend to compete on terms other than price. Loyalty schemes, advertisement, and product differentiation are all examples of non-price competition.

Oligopoly is a market situation in which an industry has only a few firms (or few large firms producing most of its output) mutually dependent for taking decisions about price and output. Oligopolistic industries can be classified into various ways. Some are following:
1. Perfect or Imperfect Oligopoly
If in an oligopoly market, the firms produce homogeneous products, it is called perfect oligopoly. If the firms produce differentiated products, it is called imperfect oligopoly.

3. Duopoly
When there arc only two firms producing a product, it is called duopoly. It is a special case of oligopoly.