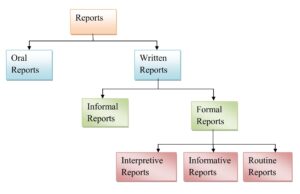 Organizations create a variety of reports for different purposes and readers. Some are routine and produced frequently, while others are less common and more complex.Following are the types of reports:

Reports may be either oral or written. An oral report is a face to face communication about something seen, observed or investigated.Therefore, an oral report is any presentation of factual information using the spoken word.Oral report  covers the most routine and informal reporting situations and  may also covers highly formal presentations.An oral report can be denied at any time but written report provides a permanent record.

Written reports are classified into:

Informal reports are typically for internal use and can go to other members of the department and department heads. They also may circulate throughout the company. Although the report may be several sections long, it is typically much shorter than a formal report. Informal reports can be formatted like a memo.

A formal report is one which is prepared in a prescribed form and is presented according to an established procedure to a prescribed authority.Formal reports can be of following three types:

a) Periodic or Routine Reports

These are prepared and presented at regular intervals in the usual routine of business.They may be presented annually,half yearly,quarterly,monthly,weekly or even daily.Generally such reports contain a mere statement of facts,in detail or in summarized form,without an opinion or recommendation.

If report merely presents facts pertinent to an issue or situation,it is informative.It contains only data collected or the facts observed in an organized form.It presents the situation as it is and not as it should be.It does not contain any conclusions or recommendations.It is useful because it presents relevant data put together in a form in which it is required by the management to take decisions.

An interpretative report,like an informational report,contains facts but it also includes an evaluation or interpretation or analysis of data and the reporter’s conclusions.It may have recommendations for actions.