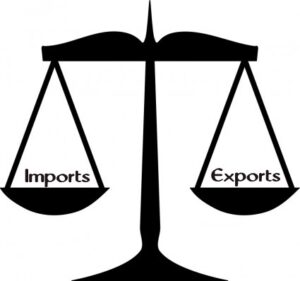 “Balance of trade of a country I the relation over a period between the values of her exports and imports of physical goods.”

A continuing surplus may, in fact, represent underutilized resources that could otherwise be contributing toward a country’s wealth, were they to be directed toward the purchase or production of goods or services. Furthermore, a surplus accumulated by a country (or group of countries) may have the potential of producing sudden and uneven changes in the economies of those countries in which the surplus is eventually spent.
Generally, the developing countries (unless they have a monopoly on a vital commodity) have particular difficulty maintaining surpluses since the terms of trade during periods of recession work against them; that is, they have to pay relatively higher prices for the finished goods they import but receive relatively lower prices for their exports of raw materials or unfinished goods.

Factors that can affect the balance of trade include:

For more notes on the International Business Management click on the link below :