Spoilage of Milk and Milk products

Spoilage of Fish and other Sea Foods

Spoilage of Fruits and Vegetables

Spoilage is the term used used to describe the deterioration of food texture, color, odour or flavor to the point where it is unappetizing or unsuitable for human consumption. Microbial spoilage of food often involves the degradation of protein, carbohydrates and fats by the microorganisms or their enzymes.

Role of micro organisms in spoilage of Cereals

Cereals and cereal products are significant and important human food resources and livestock feeds worldwide. Various types of products are prepared from the cereals like flour, cake, bread, pasta etc. If the cereals, grains and flour made from them become moistened above the minimum level microbial growth will follow. A little moistening will permit only growth of molds, but more moisture will allow the growth of yeasts and bacteria.

The major factors involved in the spoilage of stored grain by molds include microbial content, moisture levels above 12 to 13 percent, physical damage, and temperature.

A wet mash of grains or meals will undergo acid fermentation by lactic acid and coliforna bacteria normally present on plant surfaces. This may be followed by an alcoholic fermentation by yeasts as soon as the acidity has increased enough to favour them. Finally mold and yeast will grow on top surface, although acetic acid bacteria if present may oxidize the alcohol to acetic acid and inhibit the molds.

The most common species of molds are Aspergillus, Penicillium, Mucor, Rhizopus and Fusarium. Many of these molds can produce mucotoxins. Grains spoiled by these molds represent a potential animal or human health hazard as well as great economic loss.

Dry cleaning and washing of grains and the milling and sifting of flour reduce the content of micro organisms, but they are still prone to the spoilage caused by microorganisms. White wheat flour usually is bleached by an oxidizing agent like oxides of nitrogen, chlorine, nitrosyl chloride or benzoyl peroxide and thus it reduces the microbial numbers and kind. A moisture content of flour less than 13 percent has been reported to prevent the growth of  all microorganisms, 15 percent moisture content permit good mold growth and 17 percent promotes growth of both molds and bacteria. If acid forming bacteria are present, an acidic fermentation will begins, followed by alcoholic fermentation by yeasts and then formation of acetic acid by Acetobacter species. It is the characteristic of most flour pastes to develop an odor of acetic acid and esters.

Microorganisms play a useful role in bread making. They produce gas to raise the dough giving the bread the desired loose and porous texture and may produce desirable flavoring substances also. But if these microorganisms are permitted for too much time they may spoil the dough or baked bread. Usually there are two kinds of spoilage ‘moldiness’ and ‘ropiness’ 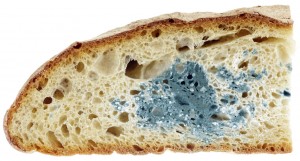