Transgenic plants are the ones whose DNA is modified using genetic engineering techniques. A transgenic plant contains a gene or genes that have been artificially inserted. The inserted gene sequence is known as transgene, it may come from an unrelated plant or from a completely different species. The purpose of inserting a combination of genes in a plant is to make it as useful and productive as possible.The capacity to introduce and express diverse foreign genes in plants was first described in tobacco by Agrobacterium mediated and vectorless approach.This process provides advantages like improving shelf life, higher yield, improved quality, pest resistance, tolerant to heat, cold and drought resistance, and various biotic stresses. 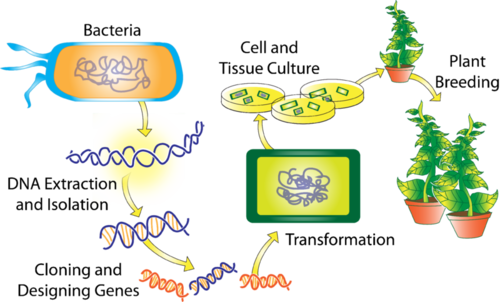 Genetic transformation has led to the possibility of transforming crops for enhanced resistance to insects and pathogens and it is rapidly moving towards commercialization. These advances form the basis of a chemical free and economically viable approach for pest and disease control.

Insect resistance was first reported in tobacco and tomato. Today insect resistant transgenes, whether of plant, bacterial or other origin can be introduced in to plants to increase the level of insect resistance. Genes conferring insect resistance to plants have been obtained from microorganisms: Bt gene from Bacillus thuringiensis, ipt (isopentyl transferase) gene – from Agrobacterium tumefaciens, cholesterol oxidase gene from a streptomyces fungus, and Pht gene from Photorhabdus luminescens.

Bt stands for Bacillus thuringiensis a common soil bacterium so called because it was first isolated in the Thuringia region of Germany. Bt produces a protein that paralyzes the larvae of some harmful insects.

Bt gene code for Bt toxin which are active against Lepidopteran larvae but some are specific for Dioteran and Coleopteran insects. Upon sporulation B.thuringiensis forms crystals of proteinaceous insecticidal δ endotoxins called cry protein which are encoded by cry genes. In most strains of B.thuringiensis, the cry genes are located on a plasmid. B.thuringiensis act as an important reservoir of Cry  toxins for production of biological insecticides and insect resistant genetically modified crops. When insect ingest toxin crystals their alkaline digestive tracts denature the insoluble crystals making them soluble and thus amenable to being cut with proteases found in the insect gut, which liberate the toxin from the crystal. The cry toxin is then inserted into the insect gut cell membrane paralyzing the digestive tract and forming pore. The insect stops eating and starves to death.

Other insecticidal proteins from bacteria, plants and animals

Plants contain peptides acting as protease inactivating proteins ( PIPs). The different proteinases are serine, cystein, aspartic and metallo proteinases. They catalyze the release of amino acids from dietary protein, thereby  providing the nutrients crucial for growth and development of insects. Proteinase inhibitors deprice the insects of nutrients by interfering with digestive enzymes of the insects.

Lectins constitute another large family of proteins that can be used as insect toxins for genetic engineering of insect resistance. They bind to glycoproteins in the insect midgut to disrupt digestive processes and nutrients assimilation. A lectin from snowdrop (Galanthus nivalis) when expressed in transgenic tobacco and potato has been found to be toxic to aphids and the tomato moth Lacanobia olecea.

Chitin is an insoluble structural polysaccharide that occurs in the exoskeletal and gut lining of insects. Chitinases are enzymes that degrade the chitin contained in an insect, shell like outer covering called the exoskeleton. Some living organisms produce chitinase enzyme. Most of these organisms are bacteria, fungi and some plants also produce this enzyme.

Resistant genes involved are primarily serine proteinase inhibitors from mammals and the tobacco hornworm (Manduca sexta). Bovine pancreatic trypsin inhibitor (BPTI), α-antitrypsin and spleen inhibitor (SI) have been identified a s promising insect resistance proteins and have been transferred to a range of plants.