Based on intensity and duration of the process inflammation can be classified as:

Acute inflammation is quick to develop and lasts for a few hours or days and is characterized by a painful red swelling due to the collection of an exudate. The inflammatory cells are mainly neutrophils and the  heals in a short time or may persist and pass on into a chronic inflammation. 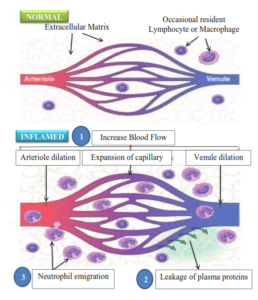 Acute Inflammatory reactions may be triggered by a variety of stimuli:

The main vascular reactions of acute inflammation are increased blood flow and increased vascular permeability, both designed to bring blood cells and proteins to sites of infection or injury. In addition, endothelial cells are activated, resulting in increased adhesion of leukocytes and migration of the leukocytes through the vessel wall. While the initial encounter of an injurious stimulus, such as a microbe, is with macrophages and other cells in the connective tissue, the vascular reactions triggered by these interactions soon follow and dominate the early phase of the response.

Cellular changes  involves neutrophils, macrophages, eosinophils, lymphocytes, endothelial cells and platelets as well as the local epithelium and connective tissue elements (extracellular matrix). The leukocytes emigrates from the circulation and accumulates in the focus of injury (cellular recruitment), followed by activation of the leukocytes, enabling them to eliminate the offending agent. The principal leukocytes in acute inflammation are neutrophils (polymorphonuclear leukocytes).

2 thoughts on “Inflammation- Definition, causes and its types”