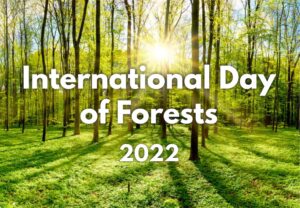 The world celebrates the International Day of Forests on March 21 every year with the aim to increase awareness about the unprecedented role forests play in sustaining lives on this planet. Forests provide food, water, and shelter to animals and human beings. They reduce the impact of events threatening to life, such as floods and climate change.According to the United Nations, forests are home to about 80 per cent of the world’s terrestrial biodiversity, with more than 60,000 tree species. Yet, we are losing 10 million hectares of forest — about the size of Iceland — each year.

We know that forests cover about one-third of the world’s landmass. People and various indigenous cultures depend upon forests for their livelihoods. Forests play a vital role in our lives, like providing shelter to animals and insects, balancing oxygen, carbon dioxide, and humidity in the air, protecting watersheds that supply fresh water to rivers, etc.

In 1971, World Forestry Day was established at the 23rd General Assembly of the European Confederation of Agriculture. The United Nations Food and Agriculture Organisation decided to celebrate every year on 21st March. This event was decided to create awareness among the public about the importance of trees.

In 2012 on 28th November, the International Day of Forests was first established and decided to celebrate on 21st March. Later, the United Nations General Assembly united the two international commemorations i.e. the World Forestry Day and International Day of Forests, and decides to celebrate on 21st March every year. It is necessary to understand the values of Forests, trees, plants as they provide raw material, source of income by providing local employment, etc.

Therefore, we understand why World Forestry Day, or International Day of Forests, is celebrated every year on March 21st. Forests are home. We should plant trees to maintain the balance of life on earth, improve the local climate, provide oxygen and store carbon dioxide, generate tourism, improve mental health, prevent us from diseases, provide a place for people to socialise, etc.

Forests cover 30 percent of the Earth’s surface. They are sources of clean air and water. According to a UN study, forests can lift one billion people out of poverty. They can also create an additional 80 million green jobs.

The UN agency on climate change, IPCC, revealed the deadly consequences of climate change across the world in the coming decades. So, this day becomes acutely significant to encourage leaders to muster the political will to address one of the most pressing challenges of our times by at least increasing the green cover at a time when the loss of agricultural land is occurring 30-35 times faster than previously estimated. Around 10 million hectares are lost every year, affecting poor communities around the world.

Also, forests act as shields from zoonotic diseases. In fact, one out of three outbreaks of new and emerging diseases are linked to deforestation and other land-use changes.