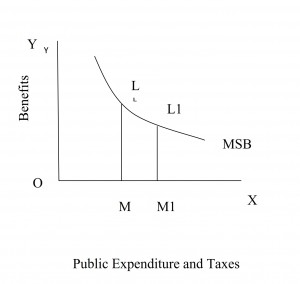 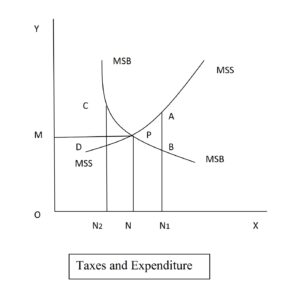 According to Dalton,”Public expenditure in every direction shall be carries out just so far that the advantage to the community is just counter-balanced by the disadvantage of a corresponding small increase in taxations.”

The doctrine of maximum social benefit can be explained with the help of following figure:

MSS curve is showing marginal social sacrifice.It slopes upwards from left to right side.This menas that as a result of every increase in government expenditure,an increase in marginal social sacrifice takes place.In this diagram,point P is showing the position of maximum social advantage.At this point,government expenditure becomes equal to the government revenue as shown by ON.Further,MSS(Marginal Social Sacrifice) is equal to MSB(Marginal Social Benefit),as shown by OM.Point P shows the positions of equilibrium.

The practical significance of this doctrine depends upon how social welfare is to be measured.Only after determining it,we can make an estimate about the system giving maximum social benefit.Dalton has given following standards of measurement in this regard:

Maximum social benefit depends upon what effect public finance is making on the country’s production.In order to maximize the social benefit,such changes in the revenue and expenditure of the government should be made which could stimulate production and could increase employment and exports.According to Dalton,increase in production depends on three factors:

Maximum social benefit also depends upon the fact that there is a proper distribution of income in society.For it, the taxation process should be changed in such a way that more and more wealth is collected from the rich and the same is spent on providing more and more facilities to the poor.

Social welfare and production efficiency are promoted when there is peance and order within and the country is protected against any external aggression.

By pursuing an appropriate Fiscal Policy,Government should avoid economic fluctuations which is a pre-condition to achieve social welfare.

Every government aims at achieving the goal of full employment through its fiscal policy.Full employment maximizes production and social welfare.

It is the bounden duty of the government to safeguard the interests of the future generation also while utilizing the available natural resources in the present.