A protein is a linear sequence of amino acids linked together by peptide bonds. The peptide bond is a covalent bond between the α-amino group of one amino acid and the α-carboxyl group of another.

Protein structures can be classified into four levels: 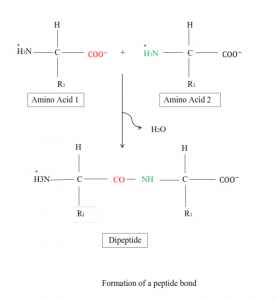 The secondary structure of protein refers to a three dimensional arrangement of various atoms of the molecules, generally known as protein conformation. An important characteristic of secondary structure is the formation of hydrogen bonds (H bonds) between the –CO group of one peptide bond and the –NH group of another nearby peptide bond. If the H bonds form between peptide bonds in the same chain, either helical structure, such as the α-helix, develop or turns, such as β-turns are formed. If H bonds form between peptide bonds in different chains, extended structures form, such as the β-pleated sheet.

The three dimensional arrangement of protein structure is referred to as tertiary structure. It is a compact structure with hydrophobic side chains held interior while the hydrophilic groups are on the surface of the protein molecule. This type of arrangement ensures stability of the molecule.

It refers to the structure and interactions of the noncovalent association of discrete polypeptide subunits into a multisubunit protein. The monomeric subunits are held together by non-covalent bonds namely hydrogen bonds, hydrophobic interactions and ionic bonds.