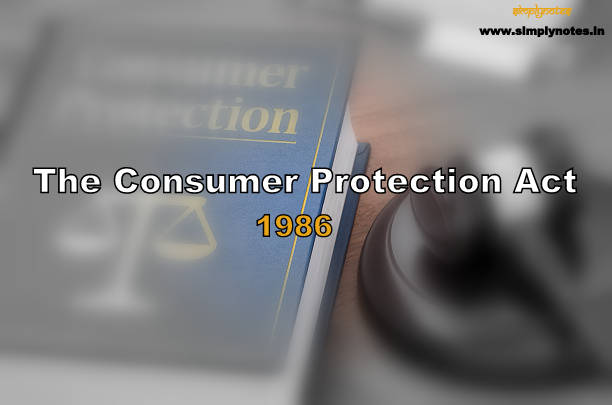 Till 1985, the consumer, specifically in India, was neglected. Traders dominated the market in every aspect of business causing concern to the consumers. In spite of various provisions providing protection to the consumer and providing for stringent action against adulterated and sub-standard articles in the different enactments like Code of Civil Procedure, 1908, the Indian Contact Act, 1872, the Sale of Goods Act, 1930, the Indian Penal Code, 1860, the Standards of Weights and Measures Act, 1976 and the Motor Vehicle Act, 1988, very little could be achieved in the field of Consumer Protection. Though the Monopolies and Restrictive Trade Practices Act, 1969 and the Prevention of Food Adulteration Act, 1954 have provided relief to the consumers yet it became necessary to protect the consumers from the exploration and to save them from adulterated and sub-standard goods and services and to safeguard the interests of the consumers. In order to provide for better protection of the interests of the consumer the Consumer Protection Bill was introduced in the Parliament.

An important landmark in consumer protection endeavours in India is the Consumer Protection Act, 1986, which provides for a system for the protection of consumer rights and the redressal of consumer disputes.

This Act extends to the whole of India except the State of Jammu and Kashmir, and save as otherwise expressly provides by the Central Government by notification, it applies to all goods and services.

The objective of the Act is to provide for the better protection of the interests of consumers and for that purpose to make provision for the establishment of consumer councils and authorities for the settlement of consumer disputes and for matters connected therewith.

Objects of the Act

1. Promoting and protecting the rights of consumers.

2. Providing for the establishment of consumer councils and other authorities.

Salient Features of the Act

1. The Act applies to all goods and services unless specifically exempted by the Central Government.

2. It covers all the sectors whether private, public or cooperative.

3. The Act envisages the establishment of the Consumer Protection Councils at the central and state levels, whose main objects will be to promote and protect the rights of the consumers.

4. The Consumer Protection Act extends to whole of India except the State of Jammu and Kashmir and applies to all the goods and services unless otherwise notified by the Central Government.

6. The provisions of the Act are compensatory in nature.

i. Buys any goods for a consideration :

‘Consumer’ also includes any user of such goods other than the buyer himself. The use of such goods must be with approval of the buyer for consideration paid or promised or partly paid or partly promised, or under any system of deferred payment. But consumer does not include a person a person who obtains goods for resale or for any commercial purpose.

Commercial purpose does not include use by a consumer of goods bought and used by him exclusively for the purpose of earning his livelihood, by means of self-employment.

Consumer Dispute means a dispute where the person against whom a complaint has been made, denies or disputes the allegations contained in the compliant.

A defect mean any fault, imperfection, or shortcoming in the quality, quantity, potency, purity or standard which is required to be  maintained by or under any law for the time being in force, or under any contract, express or implied, or as is claimed by the  trader in any manner whatsoever, in relation to any goods.

Deficiency means any fault, imperfection or shortcoming or inadequacy in the quality, nature and manner of performance which  is required to be maintained by or under any law for the time being in force or has been undertaken to be performed by a person in pursuance of a contract or otherwise in relation to any service.