8. Use of Metabolic Mutants:

Similarly, metabolic mutant of Arabidopsis and proline requiring mutant of corn have been reported.

Isoenzymes are multiple molecular forms of an enzyme with a similar or identical substrate specificity occurring within the same organism. Now –a – days, isoenzyme analysis has been extensively used to verify hybridity. Isoenzymes of different constitutive enzymes exhibit the unique banding pattern or zymograms in polyacrylamide gel electrophoresis. The number of band and Rr value of isoenzyme are constant and specific for each parental plant species. The summation or intermediate banding pattern of Isoenzymes may be found in the hybrid callus tissue. This analysis thus help to select hybrid cells.

Plants possess differences in their capacity to metabolize herbicides. This property can be utilised effectively for selection. For example, rice plants are resistant to propanil. This resistant is based on the ability of rice cells to metabolize propanil.

Cybrids or cytoplasmic hybrids are cells or plants containing nucleus of one species but cytoplasm from both the parental species. They are produced in variable frequencies in normal protoplast fusion experiments due to one of the following:

(i) fusion of a normal protoplast of one species with an enucleate protoplast or a protoplast having an inactivated nucleus of the other species,

(ii) elimination of the nucleus of one species from a normal heterokaryon, or

(iii) gradual elimination of the chromosomes of one species from a hybrid cell during the subsequent mitotic divisions.

This treatment renders the protoplasts inactive and non  dividing but they serve as an efficient donor of cytoplasmic genophores when fused with recipient protoplasts.

Fusion of iodoacetate pretreated  protoplasts with non treated protoplasts will cause metabolic complementation and result in viable hybrids. 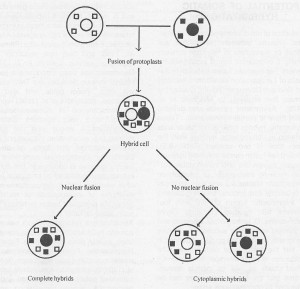